Out today from Lulu, this version preserves QR code access to the voice files, adding full web addresses for touch-capable readers, and the Readalongreads address for readers needing to access them from a different device.

Kindle doesn’t support the ePub format; Calibri is a small free app that will convert it to MOBI which you can send by email to your Kindle account.

Rapture, by Phillippa Yaa de Villiers, is dedicated to the protection of South Africa’s rhinos and is reproduced here in support of World Rhino Day.

We have to keep going as if there is a future, but it’s the end of the world,
the rapture, screaming bodies hurled to heaven. Wars everywhere and the middle
east burning: the smell of bodies lost to wonder, the callous mistake of statistics
sunburnt holes in the sky and the ritual murder of elephants and rhinos
almost industrialized, like our responses as automatic as breathing
as automatic as pressing a button as automatic as autopilot settings
as bodies kept alive by machines, and we are asked what we think
like/don’t like and there’s the debate and the edge of the world subsides

into flames of not caring. The world will end and we are nowhere near
the ones we love and the cold voice of the airport tells us to hurry to our boarding gate;
the ark is only half-built, the launch of the new strategy for the state is still waiting
for a coat of paint.
Here’s our life spread out in Eliot’s etherized surgery, facing Soyinka’s unwelcome guest
who won’t care about whether or not it’s convenient for you, will come calling when he likes
and when death comes for me I want to be busy making light. It won’t do to blame politicians for
power failures, I thank them as I write you, poem, into life.

Not dead yet, I’ve still got the whole night because I am not the one who was shot, banned or
almost beheaded, I am not the victim of some gruesome experiment with power, I simply

stand and stare at our world and write down what I see and even though it is misunderstood
at times, it stands.
The world ended just a moment ago
for another rhino lying in its lonely blood but that might not be on the news tomorrow.
Probably not. The news is hardly ever of sorrow but of egos mortally offended, naked
emperors and a child’s laugh as he paints the funfair of history. The electricity of connection
fails to resurrect our community, we’re in the dark here, so take this small hand,
this poem, this picture, spark stolen
from a power failure in Johannesburg:
may it light your way till you find your own.

First published in the 2013 anthology For Rhino in a Shrinking World (Ed Harry Owen) and subsequently with audio in the anthology Let Me Tell You a Story, 2016.

Ian McMillan is a poet, broadcaster, and presenter of BBC Radio Three’s The Verb, a programme that celebrates the spoken (and sung, and chanted, and pounded, and whispered) word. Ian’s appreciation of language; its flows and rhythms and its very many forms are what drew me to listening weekly to his programme. His way of showing language as living thing that can dance on the page if you let it out of the reverential box it sometimes gets trapped in led to me ask if he would consider writing this piece for us.

Ian is a Yorkshireman; he writes the way he speaks, and he speaks with a voice like a pint of strong dark beer in a big dimpled glass. So ease yourself into the soft-padded fireside seat of your favourite minds-eye pub, take that big glass in your hand – both hands if necessary – and give your minds-ears a treat.

“Sometimes I can read a poem on the page and I can’t quite make out what the author’s intention was: there’s something there, I can tell, but it’s hidden in the language-mist. When I hear the poem read aloud, (or accompanied by music, or acted out by a variety of voices: anything is possible once you start down this road) then the clouds are blown away and the poem does what it meant to say on the tin, to re-fashion an advertising slogan.”

Tracy has given us three sharply wicked stories about relationships: Phoenix and Marilyn – a story of courage and survival; Wood, which lulls us with the ordinariness of a couple’s mis-communication then becomes something entirely different; and Tantric Twister that celebrates the Boomer generation and is definitely not one for the kids! 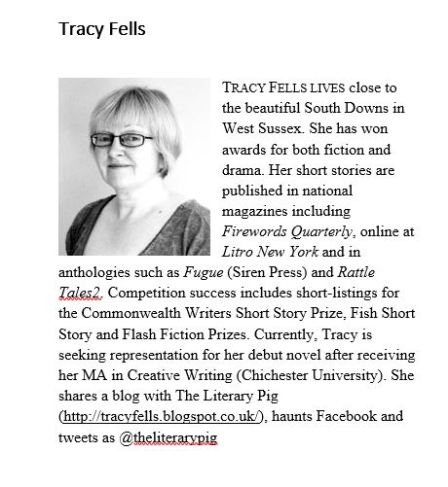 These are posts that require a password to open. Why? Sometimes because the content is for a particular audience – people taking part in a research study, for instance, where the researchers have made a sound track to explain the study; or where the tracks are linked to a book and you need to buy the book to hear them.

If you think you’d like to try out the idea, linking a voice file to a piece of printed text, just let us know. It could be anything from an information leaflet about health matters, or a collection of poems or short fiction, to items from your community newsletter. Short is good, and do take a look at our list of tips – you can find them here.

Let Me Tell You a Story is the title of a forthcoming anthology which expects to do just that – tell you the story. It will also read you the poems; give you the long pauses, the quick steps, the rushes and hushes of words and lines that sometimes are hard to find for yourself. And the voices will be the authors’ own.

The words are on the page, the voices working their way into the can, and we hope to be on some shelves very soon.